The Prince's Trust: Get Hired Jobs

Optimising the experience for Employers and Young People on a diversity and inclusivity-focused jobs board
Duration
2 months (part time)
My Role
UX Consultant & Designer (Solo Project)
Project Overview
The Prince’s Trust has strived for more than 40 years to help young people get into jobs and entrepreneurship. Their ‘Get Hired’ initiative pairs young people with employers and allows them to apply for jobs based on matching values and skills rather than CVs, which can often be a source of unconscious bias and can prevent diversity and inclusion in the workplace.  Their complementary initiative ‘Get Hired Jobs’ is a jobs board with a difference, where young people apply for jobs online by answering values-based questions.

I was brought onto the project when the jobs board had been live for 4 months with limited success and I was tasked with improving the user journey for young people - the idea being that if more young people were signing up to and using the site, the project could receive more funding in the next application round.
Deliverables 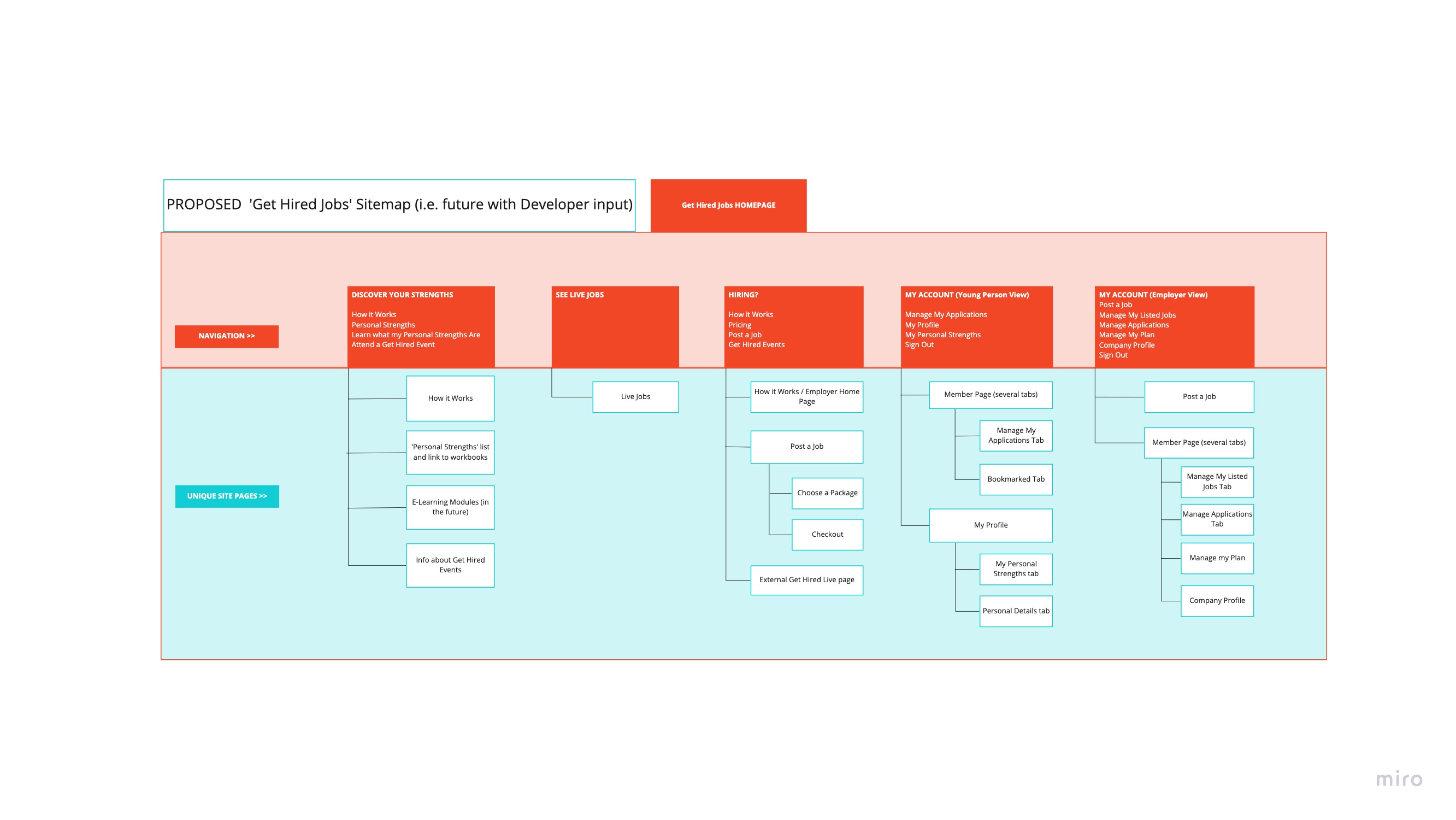 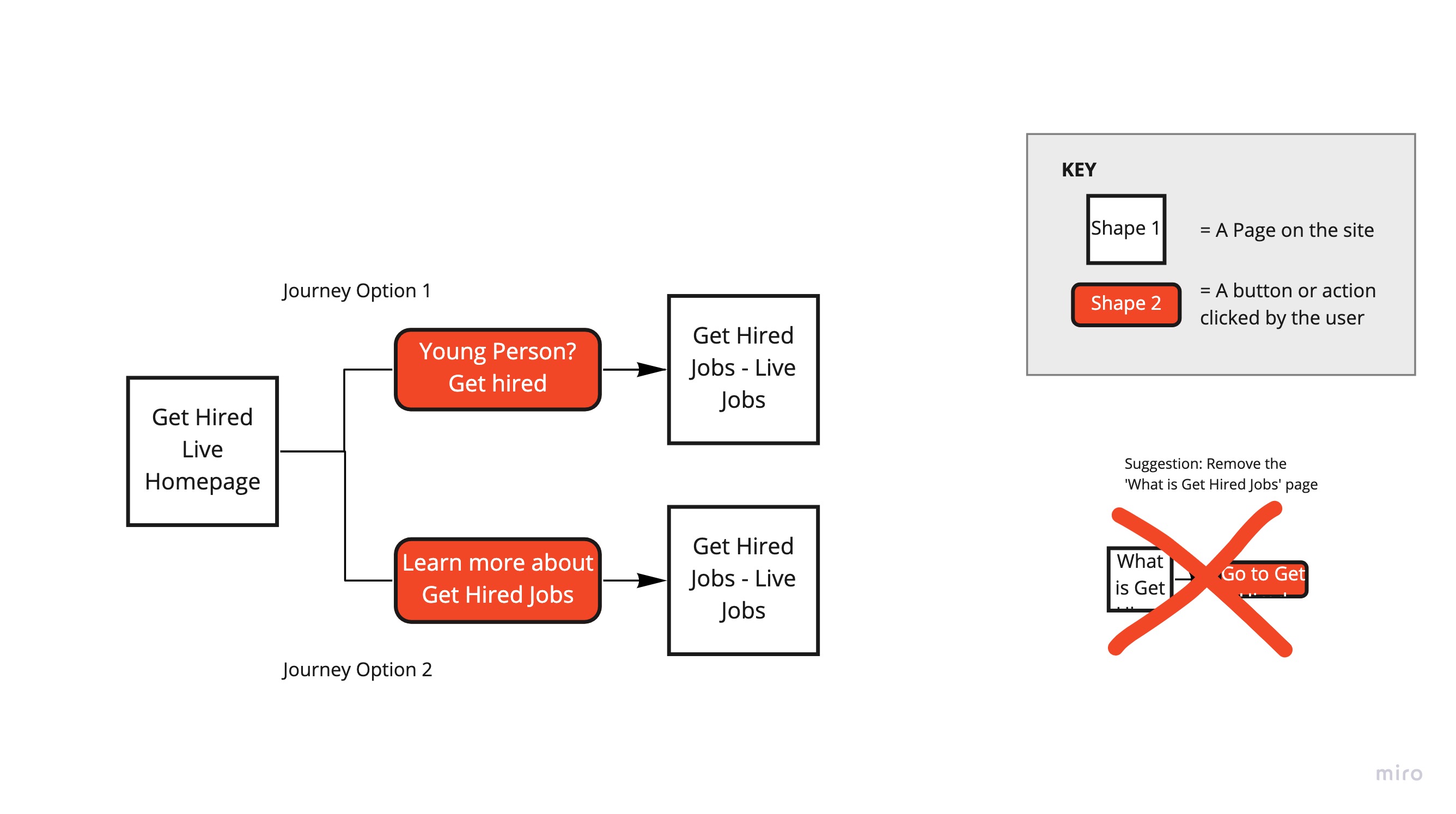 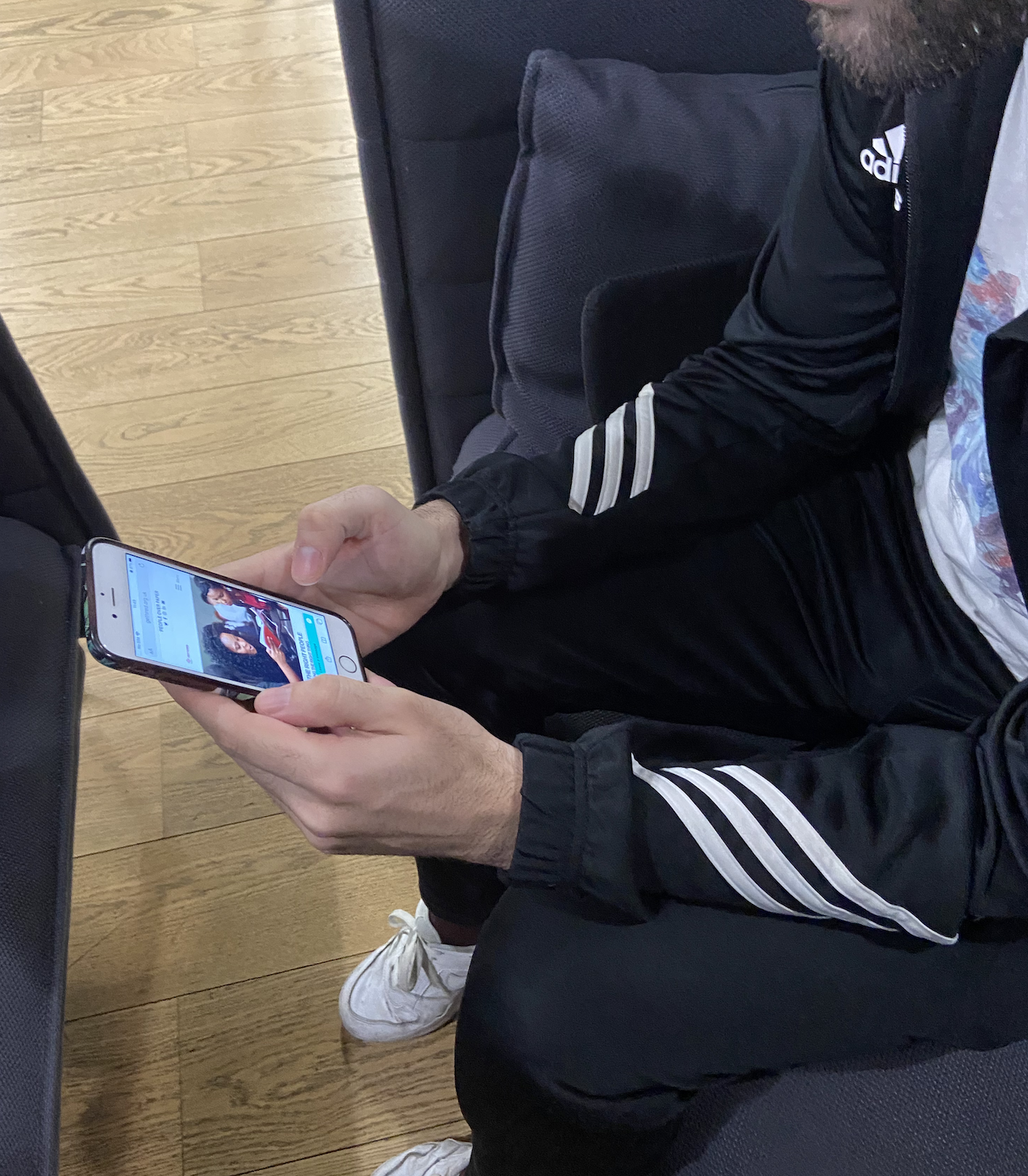 User Testing with young jobseekers on Mobile
After conducting a heuristic analysis of the existing Get Hired Jobs website and noting down some areas for improvement, I began my research phase of the project by studying some screen recordings of Young People applying for jobs on the site. I observed around 25 recordings to start with across desktop and mobile, and created a document to note down any recurring patterns in behaviour and any areas of the site that were causing problems.

In order to validate assumptions made from the recordings, I did some in-person user-testing with young job-seekers who were completely new to The Prince's Trust. I set them 5 tasks on the site and asked them to think aloud while completing them, as well as rating each task in terms of difficulty. Doing this was very useful and helped to round out and inform my decisions. Note that I tested the site with them on mobile as I had noticed via the screen recordings that more people were applying to jobs on mobile (perhaps due to CVs not being necessary).
Solutions & Recommendations
After I had defined several key problems with the website I began to ideate possible solutions to these. Because I didn't know how long I would be working on the project, I wanted to condense all of my findings and recommendations into a presentation so I could not only run my findings by the project lead, but also provide a useful handover document for any Devs or UX Designers working on the project after me. Below are some examples of my recommendations: 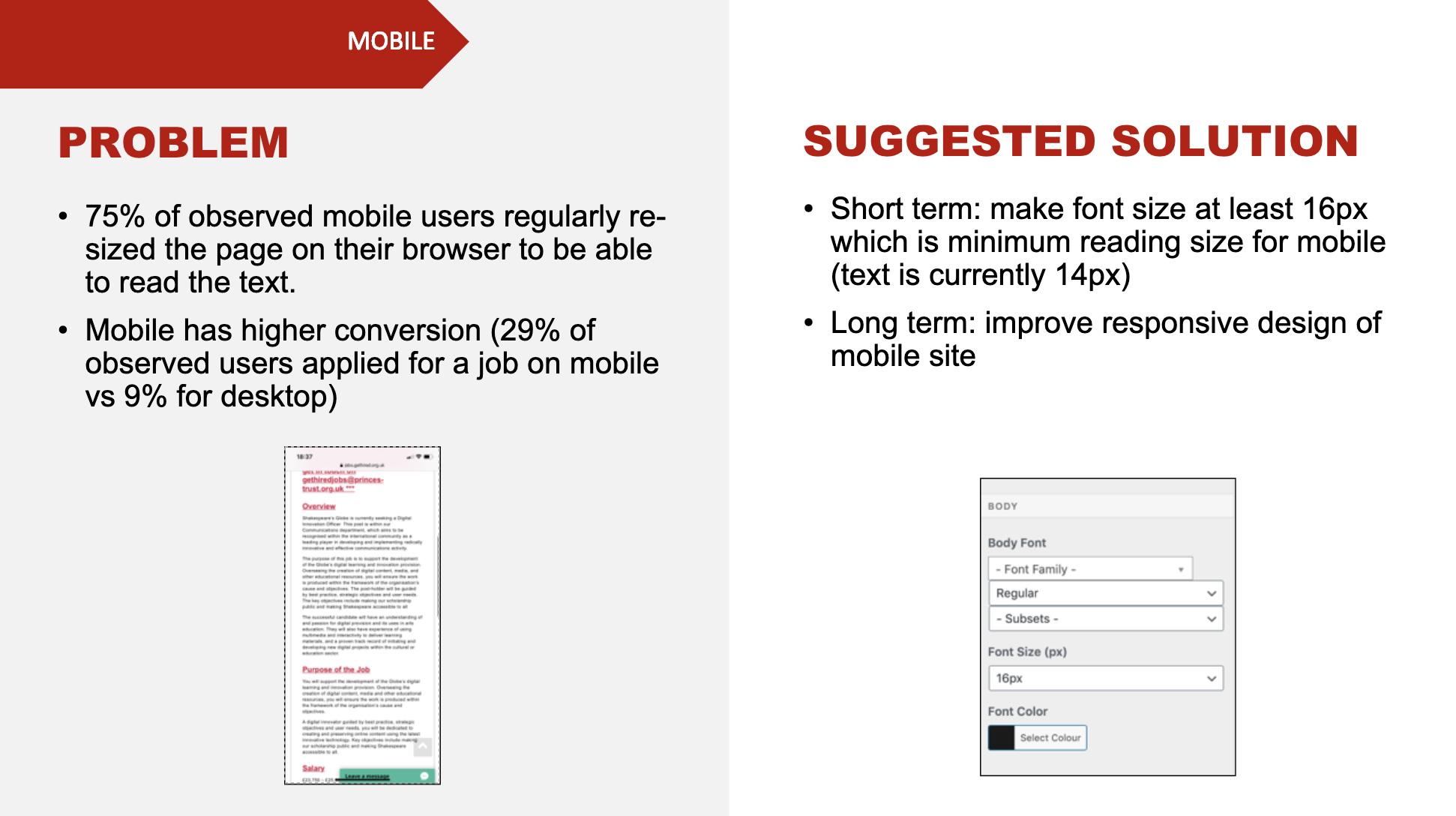 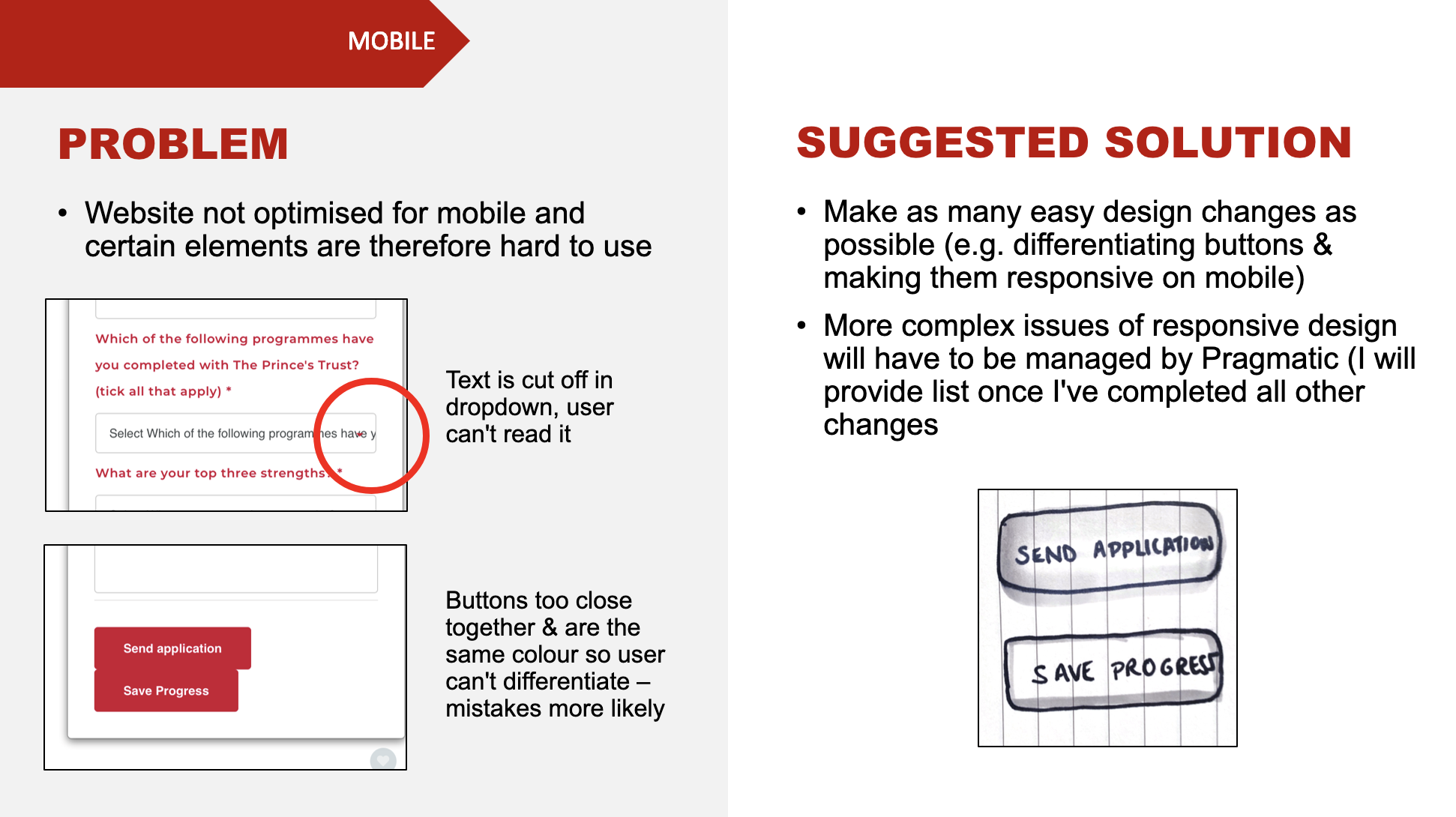 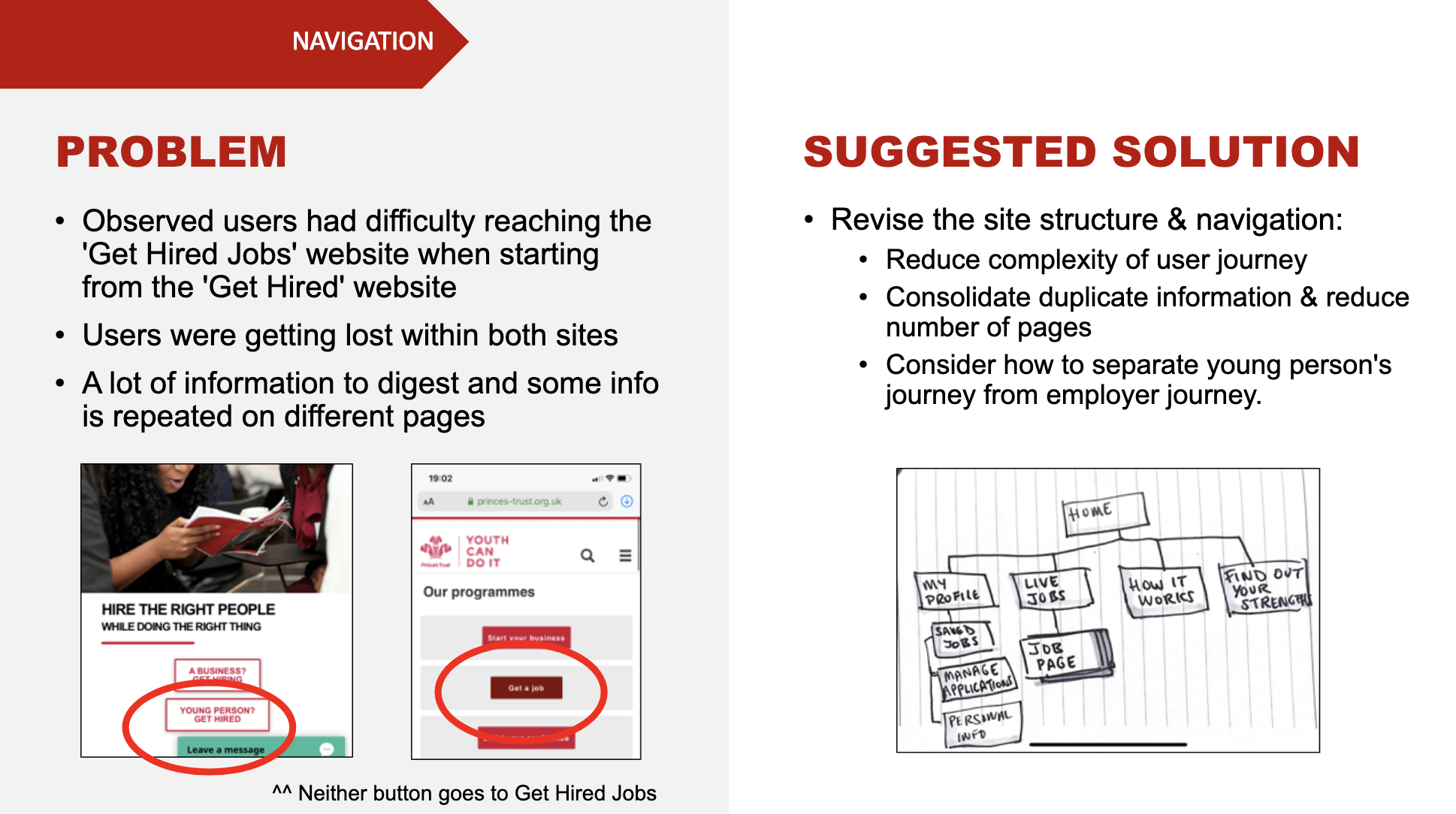 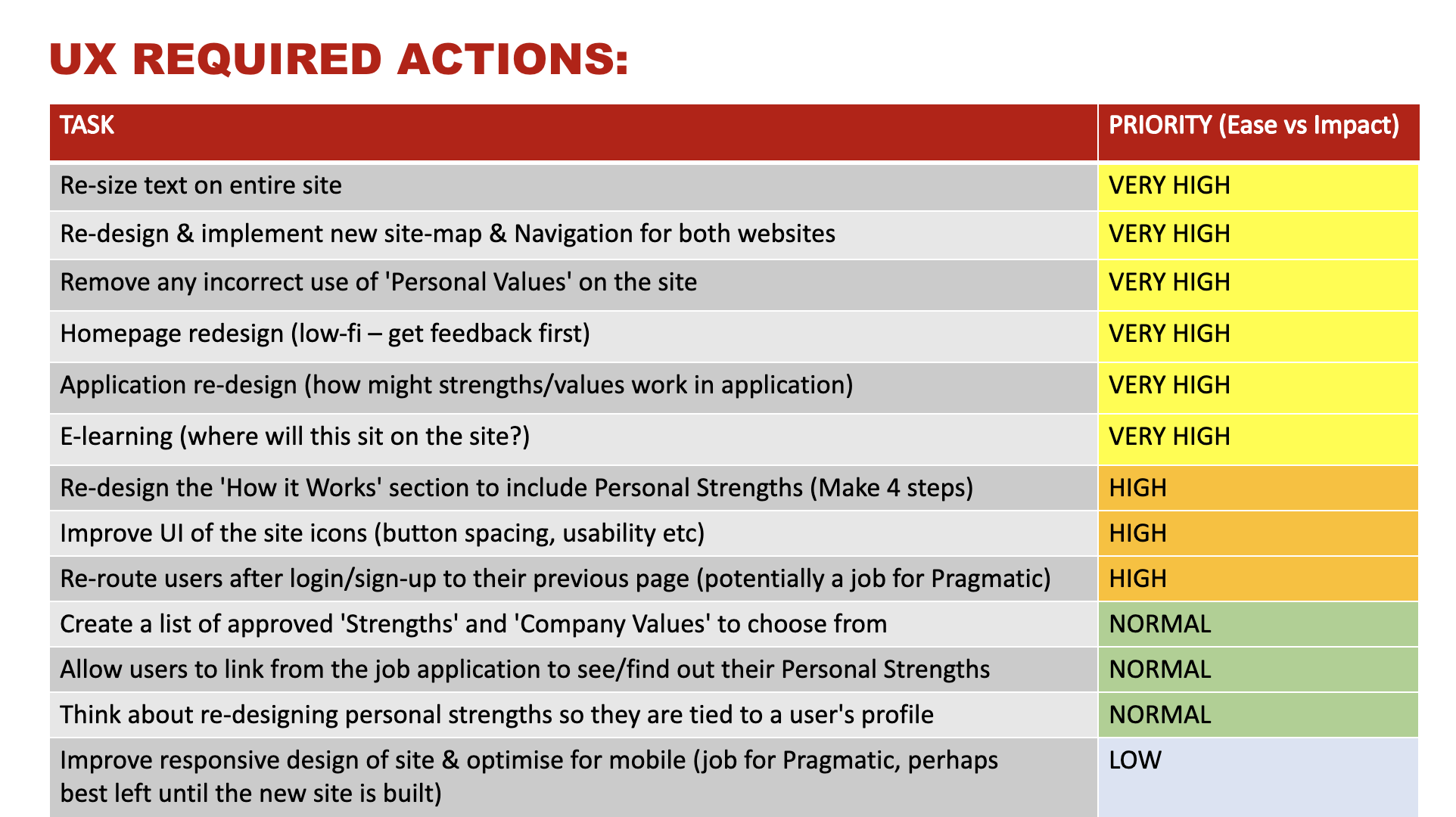 'How it Works' Homepage Widget

One of the first things I noticed during my observations of screen recordings (and later validated in my user testing) was that users were scrolling to the 'How it Works' widget on the homepage and attempting to reach the listed jobs by clicking on the 'You search for a Job' aka step one of the 'How it Works' instructions. Unfortunately despite having the appearance of an interactive card/button, and despite the search icon having an animation upon clicking, this didn't have a link and so didn't lead users anywhere. Adding a hyperlink through to the list of jobs was a quick fix.

Another change I made was to the order of the 'How it Works' cards/instructions. A key part of the website's point of difference is that Young People don't require a CV to apply for jobs, and instead apply for jobs based on their strengths, and how they match to each job/company.

Yet during the user testing, the task that my participants rated as the most difficult was discovering their personal strengths. There was information on the website about how to find out what your personal strengths are, but as well as not being able to locate it, users weren't aware that this was part of the process until they were already in the middle of a job application.

By making 'Find your strengths' the first step in the 'How it works' widget on the homepage and providing a link from this card through to the strengths information page, this allows young people to make sure they are fully informed before applying for any jobs. 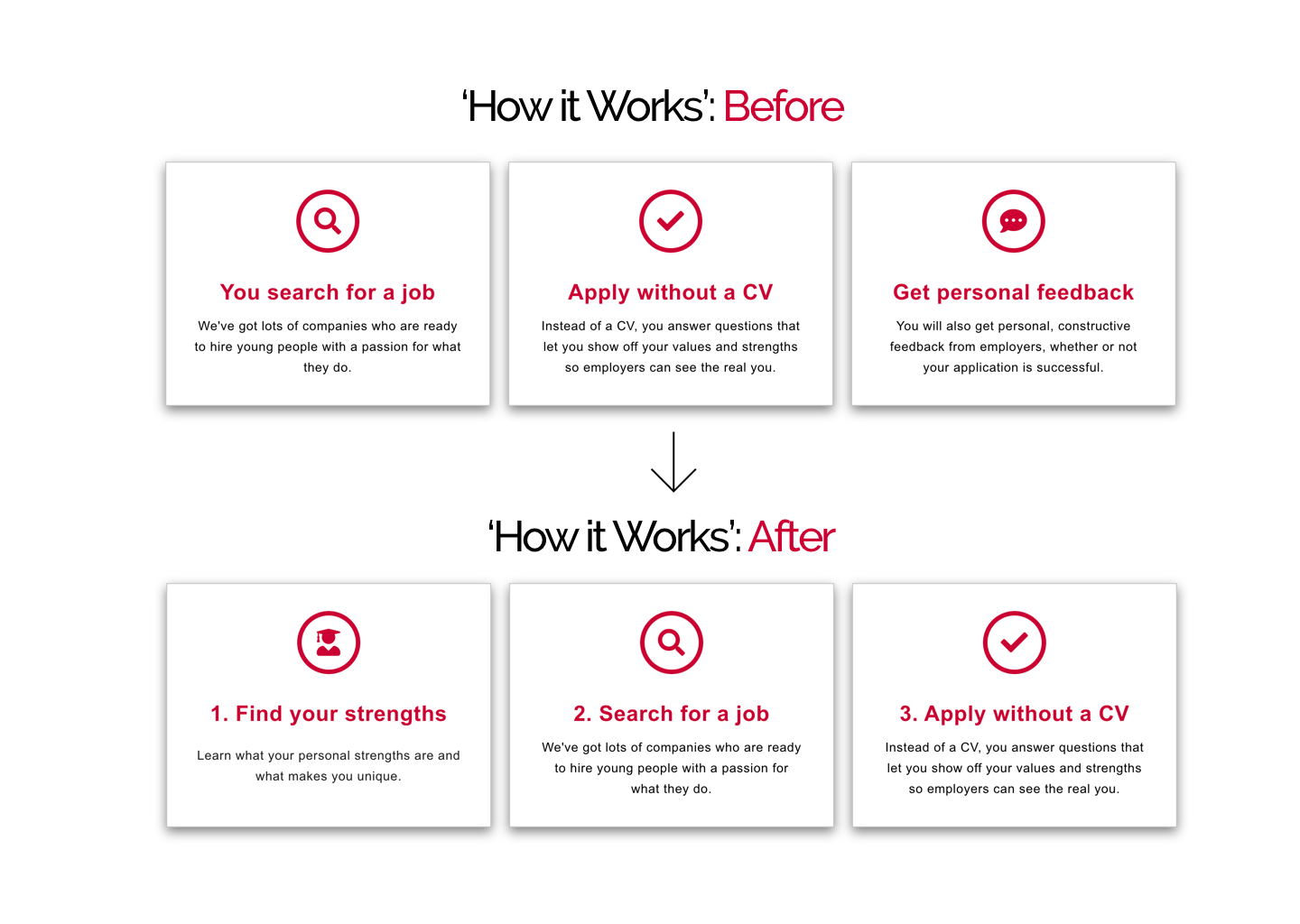 One of the key points of difference of this jobs board and initiative is that young people can apply without the bias of CVs and based on their strengths alone. There was already a page on the site with a list of personal strengths and their explanations so that people could scan through and see what their strengths might be, however this was just in the form of a long list which wasn't very easy to scan. By adding icons and separating into rows each with three strengths, the list is now more scannable and user friendly: 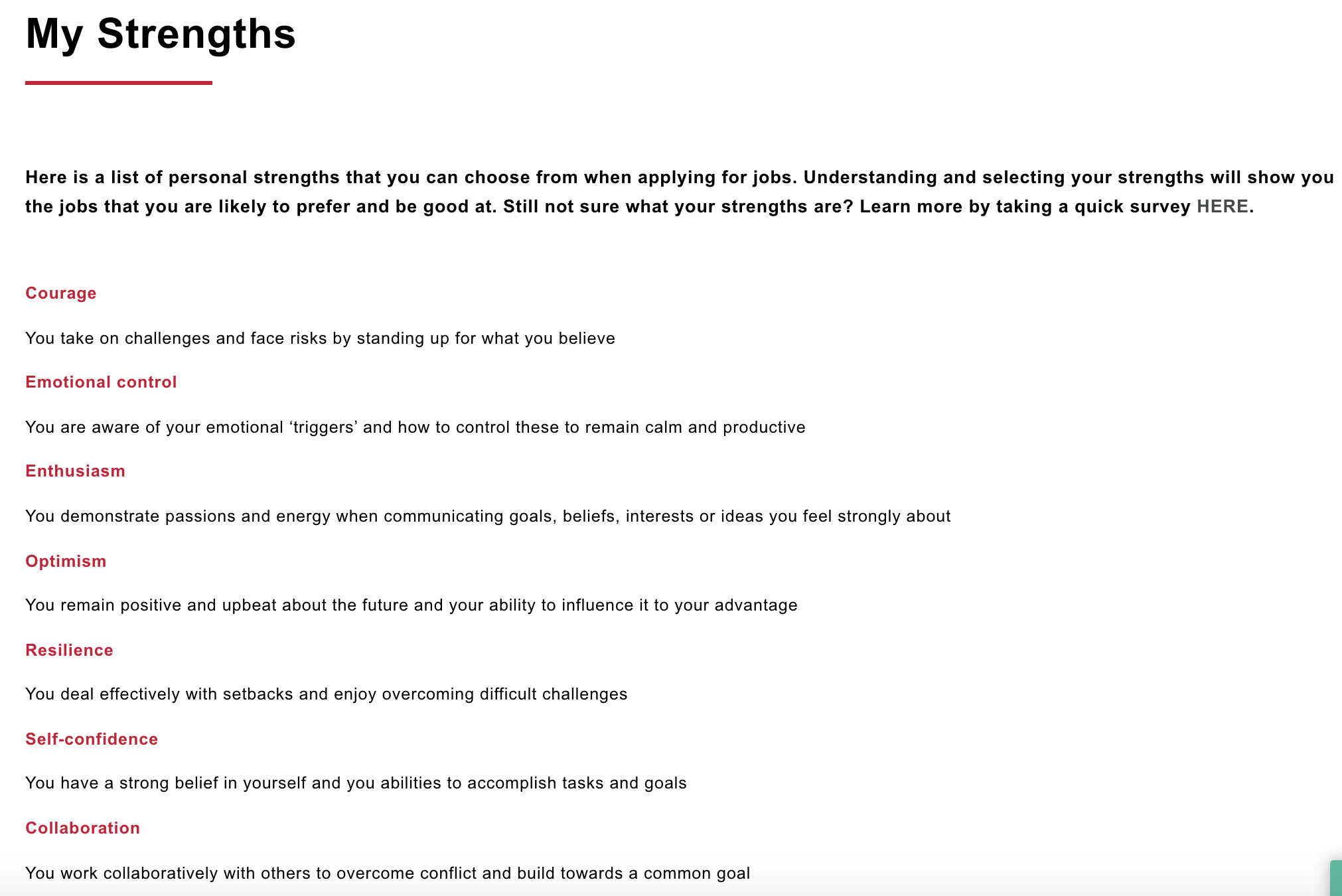 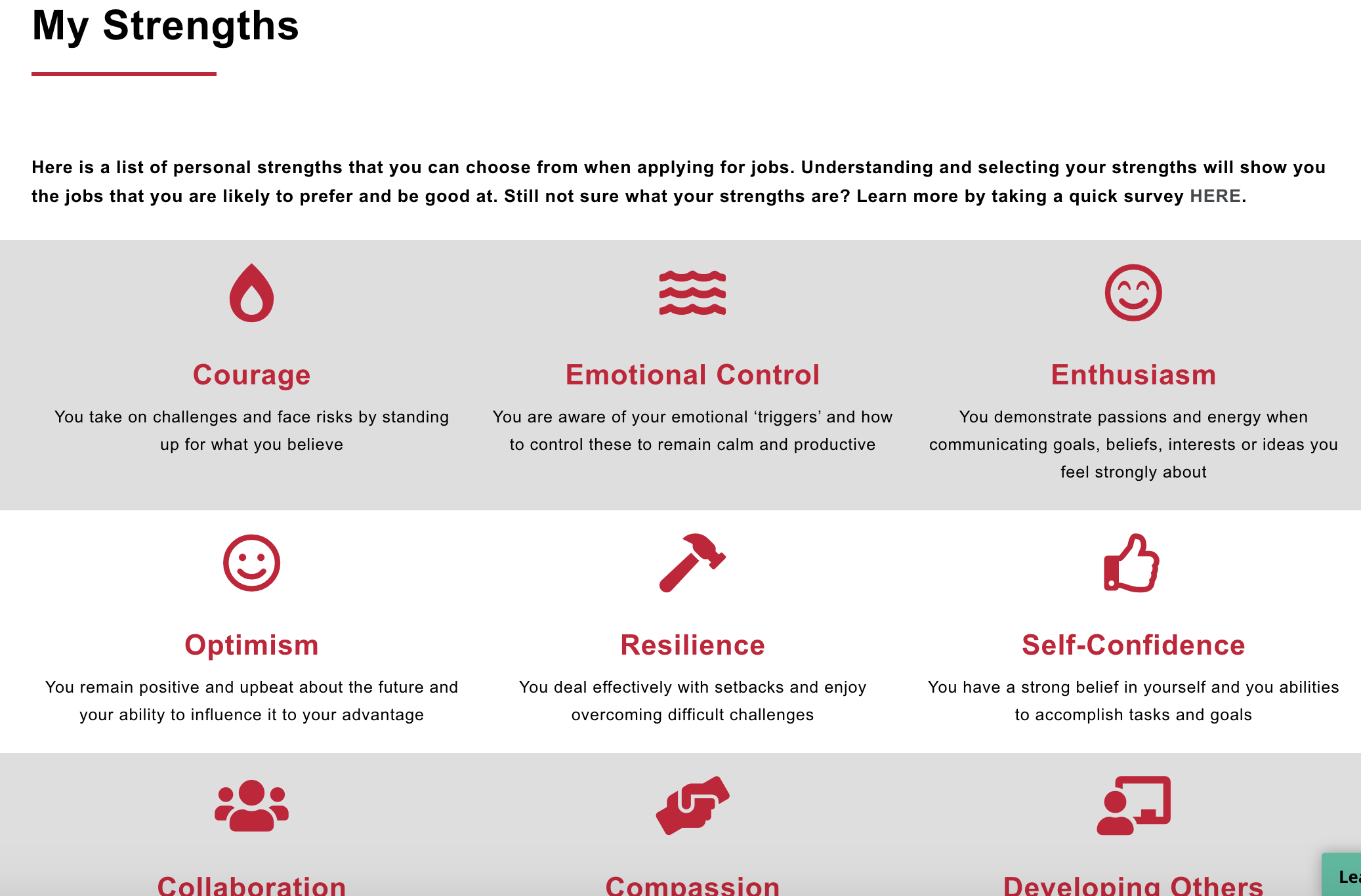 Before & After: The Redesigned Personal Strengths

The original homepage for Get Hired Jobs had a lot of space taken up by one photo and didn't let users know that there was content below the fold (content that let young people know how it all worked). Instead there were two buttons and it was unclear whether they were both directed at employers rather than young people:

Before: The 'Get Hired Jobs' Homepage
I decided to focus the homepage more clearly towards young people as the main users of the site, though I still kept some content and links for employers but moved them further down the page. In order for young people to see what the programme is really about quickly and effectively, and to avoid confusion with too many links, my redesign of the homepage is cut down to basics and shows the user that there is content to scroll down to to learn more:

After: The Redesigned 'Get Hired Jobs' Homepage
In addition, I created a more distinct landing page for employers (arriving at the site from the related 'Get Hired' general website) which explained the jobs board and how it works from their perspective as hiring managers. To help direct Young people and Employers to the right landing page respectively, I added these options to the menu on the main Get Hired website. 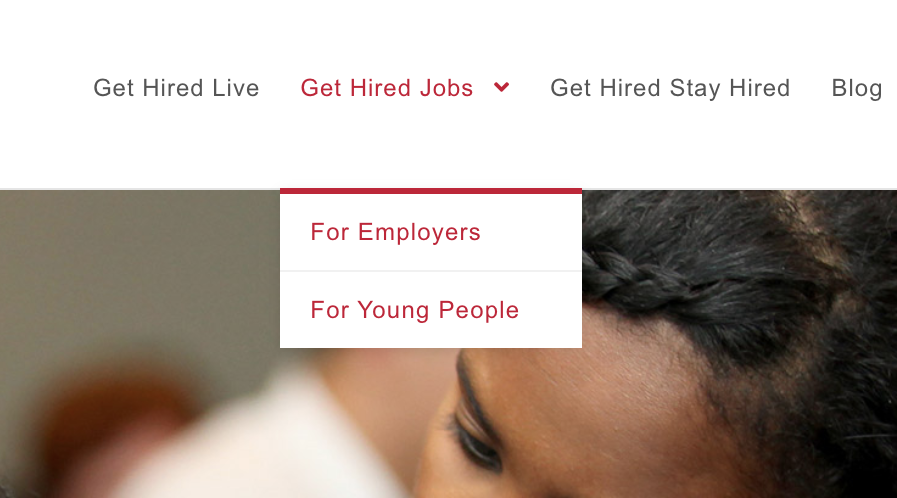 Nav bar on the main Get Hired Website - each directs the user to the preferred landing page of the Get Hired Jobs site.

After: The Redesigned 'Get Hired Jobs' landing page for Employers
The 'My Account' dropdown menu has different options according to whether you are a Young Person or an Employer. Ultimately I would have liked to tailor the navigation bar in the same way and show different menu options depending on the type of account, however due to the limited timeframes and lack of access to developers I opted to keep the menu the same (i.e. intended for both types of user).

Given more time and chance to work with a developer, I would like to have explored:
Learnings
Working as a UX team of one on this project was equally challenging and rewarding. While it allowed me to step up to a challenge as a junior designer and gave me a lot of autonomy and ownership, I definitely felt that the project was hindered by not having access to Product Managers or Developers. Equally I think the UX work could have been even better had I had another UX designer with whom to collaborate and share ideas and solutions.

This was the first time I've ever made changes directly to a website rather than creating wireframes in various fidelities and testing each of those with live users. It was a taste of a lean approach and makes sense because the product is already live and being used by people, however I still made sure to sketch out some layout ideas first before diving in.